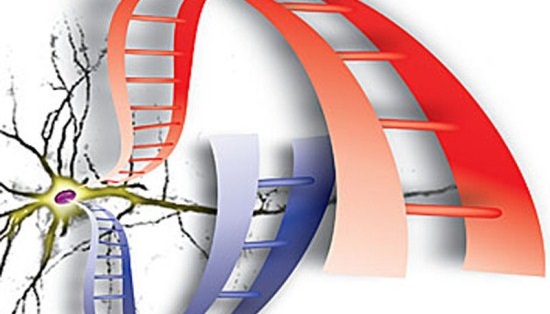 The Brain Responds To Paternal And Maternal Genomes Differently

It is common knowledge that we inherit half of our genes from our mother, the other half from our father. For the function of most genes, it doesn’t matter which parent a gene comes from. But this is not true for all genes: about 150 genes are subject to “genomic imprinting,” which means that, depending on the gene, they are active either only if inherited from the mother, or only if inherited from the father. Most of these “imprinted” genes are important for our development. Simon Hippenmeyer, Professor at the Institute for Science and Technology Austria (IST Austria), and his research group, including Postdoc Susanne Laukoter and Senior Laboratory Technician Florian Pauler, have now shown that brain cells react very differently to genomic imprinting, depending on the cell type. This is the result of a study on mice, published in Neuron.
Previous studies have shown that imprinted genes are more active in some tissues, and less active in others. The neuroscientists led by Hippenmeyer found that imprinted genes in the cortex are also more strongly expressed, i.e. are more active, in some cell types than in others.
To investigate the effect of this varying gene activity, the researchers made use of the MADM technique established by Hippenmeyer. “This technique enables us to color-code cells and simultaneously raise or lower the gene expression level,” explains Susanne Laukoter. “In our experiments, we doubled the expression of imprinted genes in some cells and switched their expression off completely in others. We were thus able to observe at the single-cell level how cells react to changes in the gene dose.”
The researchers found that cells respond to changes in the dose of imprinted genes by activating certain gene groups — in particular gene groups that are important for cell death, growth, and the development of synapses. This response was strongest in the cell type of astrocytes, a form of glia cells that support neurons.
A detailed analysis showed that astrocytes with a double dose of some paternal genes are always present in higher numbers than astrocytes with a double dose of the corresponding maternal genes. This difference was present throughout the brain’s entire development. “Either genomic imprinting protects cells with a double paternal gene dose from cell death, or the double maternal gene dose accelerates cell death,” explains Florian Pauler.
Earlier studies already suggested a link between genomic imprinting and cell death, the newly published study now shows that this link depends on the cell type and is particularly strong in astrocytes. Neurons with a double number of maternal genes did not respond with changes in cell death but instead formed different connections and networks. Simon Hippenmeyer explains the result. “Each cell type responds differently to disomy, i.e. the presence of two maternal or two paternal genes.” This might also be important for humans. “Prader-Willi syndrome and Angelman syndrome are caused by a duplication of an imprinted chromosomal segment. Each organ responds differently to the duplication. Hopefully, if we can better understand the cell type-specific response, targeted therapy may be possible in the future.”
The study also resolves a long-standing debate in neurobiology concerning how many genes in the brain are subject to genomic imprinting, reports Hippenmeyer. “A few dozen genes in the cerebral cortex are imprinted and significantly affect development.”