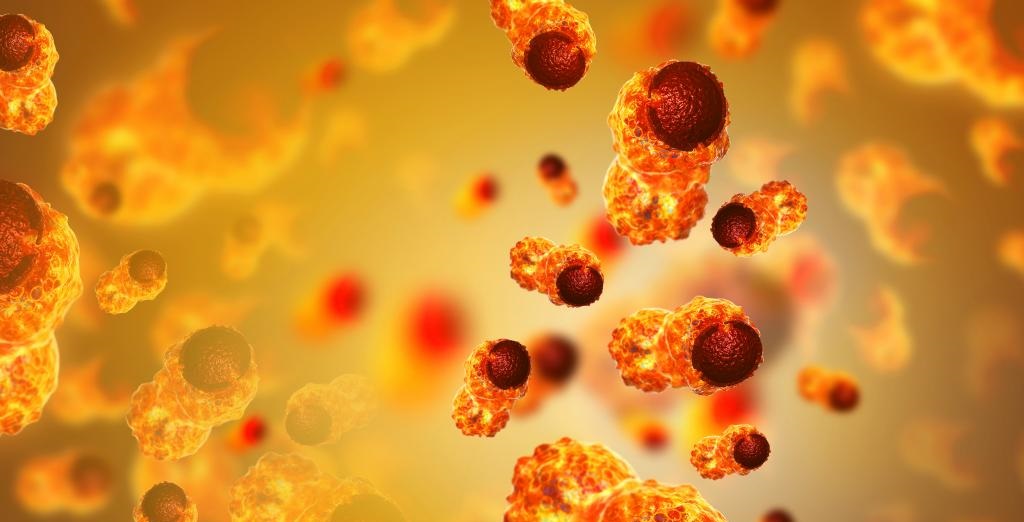 Scientists Are Looking To Nano Particles To Treat Cancer

A first-of-its-kind nanoparticle-based in vivo imaging technique that may one day be used to help diagnose and even treat cancer has been developed by researchers collaborating from Michigan State, Johns Hopkins, and Stanford universities.
The technique captures mechanical properties in living subjects that probe fundamental relationships between physics and in vivo (in a living organism) biology. The results are published in the journal Materials Today.
Bryan Smith, associate professor of biomedical engineering at MSU, worked with colleagues to develop the tiny particles, which, once inside living cells, can reveal important information about cell structure — including how tumor cells physically change as they form a tumor.
“We engineered the ability to measure and quantify the nanomechanical properties of individual living cells within the body of a living animal for the first time,” Smith said.
In a study earlier this year, Smith and his team designed nanoparticles that helped “eat” away atherosclerosis, the plaque buildup in arteries that can lead to a heart attack. The particles selectively entered immune system cells known as macrophages, delivering drug instructing cells to devour the harmful plaques.
Now, Smith and his colleagues have created a technique using different nanoparticles that can be embedded into various cell types, including cancerous breast cells, in live animals. Analyzing how the particles move within the cell can reveal a lot about their internal physical properties.
“There previously existed no method to examine mechanical properties in living subjects — for example, in mammals — with high spatial resolution,” Smith said. “Such techniques promise to open entirely new avenues of inquiry for both disease diagnosis and treatment.”
The mechanical properties of biological tissues have been known to play a major role in many disease states, including heart disease, inflammation, and cancer, as well as normal physiology such as cell migration and organism development. In the current study, Smith and his team used nanoparticles to first compare the mechanical properties between cells in culture — both standard 2D and 3D — and in live animals.
Tracking the movement of the nanoparticles revealed that the environment in which the cells are observed greatly affects their mechanical properties — which could mean that certain cell models may not be such valid representations of live animals.
“This tells cancer scientists interested in cancer mechanics that 2D conditions may poorly replicate, and that certain 3D conditions get substantially closer, to mimicking conditions within the live mouse,” Smith said.
The next part of the experiment looked at what actually happens to the internal structure of cancer cells as they begin to form tumors. Previous methods couldn’t answer the question because they were too invasive to test in living subjects.
Again, observing the movement of the nanoparticles within the cells, the team measured how “compliant,” or soft, the cells were. Importantly, they found that normal cells’ pliability remained steady over time, but as cancer cells formed a tumor over the period of a week, they stiffened.
“We found that as a tumor begins to form in a living mouse, individual tumor cells mechanically stiffen. This is a fundamental finding which is ultimately likely to have implications for cancer spread (metastasis) and tumor lethality,” Smith said. “The discovery was made possible by integrating state-of-the-art imaging and particle tracking technologies from our and our collaborators’ labs.”
The research has a number of promising applications in medicine. One of these is simply evaluating which cell culture methods are enough like living organisms to provide meaningful information. Another is measuring the cell mechanical properties of common biological functions, including organ development, in living organisms.
Perhaps the most exciting application may be in disease diagnosis and treatment, Smith said. Nanoparticles might be used to monitor the health of cells and the types of changes they undergo in disease processes — and may even alter that course.
Smith and his colleagues plan to look at the formation and dissemination of cancer metastases, which cause about 90% of cancer deaths.
“I hope one day we’ll be able to treat the physics of metastasis,” he said. “But, we must first understand the mechanics and how changing them impacts cell behavior. We’re now looking into this.”