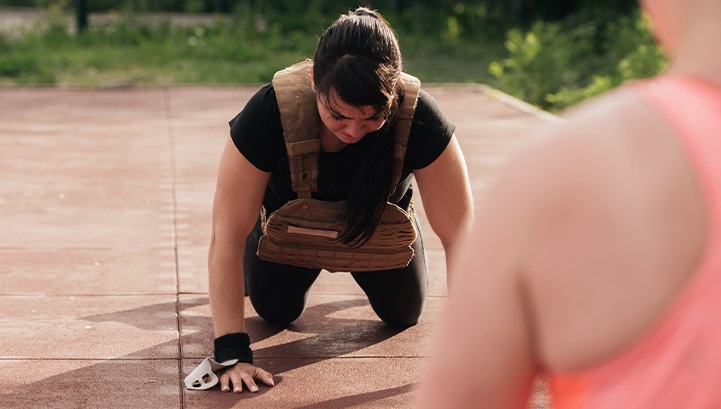 A Surprising Use For Weighted Vests

Scientists from the University of Gothenburg, Sweden, have found a new method of reducing human body weight and fat mass using weighted vests. The new study indicates that there is something comparable to built-in bathroom scales that contributes to keeping our body weight and, by the same token, fat mass constant.
The researchers hypothesized that loading the vests with weights would result in a compensatory body-weight decrease. Sixty-nine people with a body mass index (BMI) of 30-35, the lowest obesity category, took part in the clinical study. Their instructions were to wear a weighted vest eight hours a day for three weeks, and otherwise live as usual.
All the study participants wore weighted vests but, by drawing of lots, they were assigned to one of two groups. The control group wore only light vests weighing 2.24 lb., while the treatment group wore heavy vests weighing some 25 lb. When the three weeks had passed, the experimental subjects who wore the heavier vests had lost 3.5 lb. in weight, while those wearing the light vests had lost 2/3 lb.
We think it’s very interesting that the treatment with the heavier weighted vests reduced fat mass while muscle mass simultaneously remained intact, says Professor Claes Ohlsson of Sahlgrenska Academy, University of Gothenburg.
The effect on fat mass we found, from this short experiment, exceeded what’s usually observed after various forms of physical training. But we weren’t able to determine whether the reduction was in subcutaneous fat (just under the skin) or the dangerous visceral kind (belly fat) in the abdominal cavity that’s most strongly associated with cardiovascular diseases and diabetes, says Professor John-Olov Jansson of Sahlgrenska Academy, University of Gothenburg.
In previous animal studies published in 2018, the scientists showed that there is an energy balance system that endeavors to keep body weight constant: the gravitas at, as they have dubbed it. In mice, this regulation takes place partly by influencing appetite. To work, the system must contain a kind of personal weighing machine. The researchers’ new clinical study shows that similar built-in scales exist in humans as well.
If people do a lot of sitting, what seems to happen is that the reading on our personal scales falls too low. This may explain why sitting is so clearly associated with obesity and ill-health. Weighted vests can raise the reading on the scales, resulting in weight loss.
Many questions about how the gravitas at works remain for the researchers to answer. Aspects they want to study include whether, in wearers of weighted vests, changed energy expenditure, appetite and mobility help them to lose weight. The scientists also want to see whether the weight reduction continues for the vest wearers over periods longer than three weeks and whether the dangerous visceral fat is reduced by the treatment.